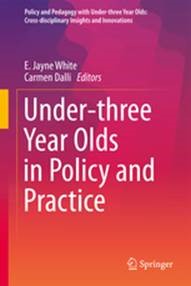 ISSA’s Program Director Mihaela Ionescu and Program Specialist Dawn Tankersley have contributed to the first book in the new Springer series, Under-three Year Olds in Policy and Practice. Their chapter, A Quality Framework for Early Childhood Practices in Services for Children Under Three Years of Age: Starting Regionally – Moving Globally, describe both the process of and need for developing such a framework. The care of children under three years of age in the regions of Central/Eastern Europe, Central Asia, and the Commonwealth of Independent States had a different history from other parts of Europe. Until the early 1990s, the educational system in the Soviet Union and communist-bloc countries provided care and education for the vast majority of young children from birth through entrance into primary school in state-supported centres with trained, qualified staff. These centres were part of the public-good approach which put women into the workforce by guaranteeing their children’s needs for food, cleanliness, and safety were well attended to. After the fall of the Communist Bloc in the early 1990s, many factors, such as economic crises, increased unemployment, and a sharp reduction in public investment for children’s care and education, altered what had been a well-regulated and well-funded public service leading to the closure of many centres and crèches. In 2013, ISSA surveyed its 40 member organizations on early childhood care and education services being offered in their countries to children under three years of age and their families. Results showed that children’s and families’ access to these services had decreased since the 1990s and that where they did exist, the quality in many locations was low. The report shows that the status of services for children from birth to three years of age, although services for this age level are offered by law, there is very limited room in the crèches/daycare centers for younger children and then, usually only in urban areas. Barriers to providing early childhood services in crèches and daycare centers cited in the report include: a lack of awareness of the importance of this age group, lack of finances; and lack of coordination between sectors. Some of the common problems existing in services in the region for this age category and their families include: too many children cared for by a single adult; fragmentation of services between different ministries as well as between national and local authorities; and a lack of national, unified quality standards for services for this age level in many countries. As the importance of quality experiences for the optimal development of children in this age level becomes more documented, these challenges are requiring more urgency to overcome. In response to this report, ISSA decided it was important to develop a Quality Framework for Birth to Three Services advocating for quality practices in all services for children from birth to three years of age which could serve as a guide for defining what quality experiences ‘look like’ for this age group. ISSA is an international association that connects professionals and non-profit organizations working in the field of early childhood development. The Quality Framework for Birth to Three Services is free to download. The Springer book can be purchased on their website.